This is cartoonist Doug (Douglas) Wilson from the United Kingdom.

I’ve always had an interest in cartoons and animation. I guess most kids have, but I never grew out of it. There are a few artists in my family tree but most were hobby artists, I think I’m the first to make a living from it. Luckily, my parents were very supportive. I don’t know if they worried about me pursuing art. If they did, they never let on. My backup career was to become a musician, so they must have been worried!

I think the biggest early influences on my cartooning were Garfield, Looney Tunes and Disney movies. I would collect the little paperback Garfield books from second hand book stores and always be searching for ones I didn’t have yet. That definitely sparked a lifelong love of comic strips. 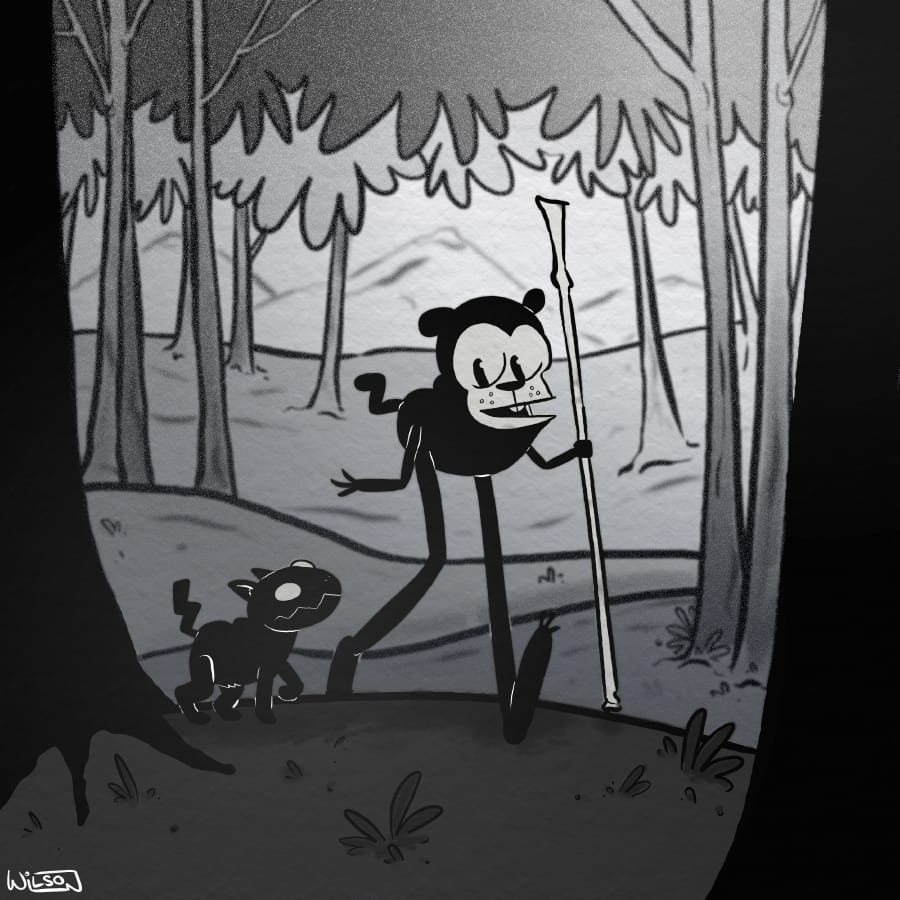 The Simpson’s was another biggie for me. And Matt Groening in general. I got a copy of his Life in Hell comic strip fairly early on and that definitely inspired me. They were so weird and darker than the Simpson’s.

I think I realised that the Simpson’s was the mainstream sanitised big budget show, which was still great, but here was a direct view into the creator’s head. Completely unfiltered and uncensored. That might have been the first indie comic I experienced. And it led me to all sorts of other cool discoveries like Robert Crumb and Gilbert Shelton, Doug Tennapel, Ralph Bakshi and Bill Plympton. I love the indie stuff.

And then the last big early influence I can think of is Red Dwarf, which I consumed for years on repeat (and read all the novels). I’m a big sci-fi nerd and that show just hooked me big time. I think if I could write and draw a comic for any existing property, it would be Red Dwarf. I know the characters so well, it would be pretty easy, I think.

If I had to pick a favourite illustrator, it’d probably be Bill Waterson or Jamie Hewlett. Both of those came later so I wouldn’t call them formative, but their creations are what I would strive for in my own work. I’ve still got a long way to go!

About studying, I did a foundation art course after A-levels and kind of re-discovered my childhood love of animation doing a flip-book project. From there I signed up for an animation degree course and fell down the rabbit hole. I was totally obsessed with learning all things’ animation. My drawing skills were pretty poor, and I really struggled with that early on. When I found 3D animation, I felt so relieved because I could see a path to actually being employable without having to be a master draftsman.

I loved crafting an acting performance and managed to land a job on an indie feature film 6 months out of University. I was lucky to have a great lead animator on that job, Michael Cawood who taught me a lot. Part of the film was being outsourced to India, and one of my jobs was to help write out his feedback notes on the outsourced animation. That was such a great insight!

I carried on drawing whilst working in 3D, and I actually found that animating in three dimensions really helped me think about the structure of a drawing, and giving things volume and form etc…

My day job career has always been in animation, and it’s been a relatively steady job. Outside of working in a creative field I’ve always had personal projects that I work on in my spare time. It improves my skills and gives me a creative outlet to keep me sane. Sometimes short films, but mostly I’ve worked in comics. My latest project is Jack Astro, a sci-fi comedy. I usually describe it as a cross between Red Dwarf, and Alice and Wonderland. I really wanted to write a comic that is funny, first and foremost. I think working in a sci-fi setting, it’s easy to get carried away with the story and drama and forget the tone of a story. While I wanted to have elements of drama, the comic never takes itself too seriously, and it always comes back to the comedy.

The character started out in an animated short film which is on my website. The world and supporting characters just grew out of exploring scenes and ideas in my sketchbook and in scripts.

Here’s the elevator pitch for the book: Jack Astro is a test pilot for the experimental Singularity Drive program. After sending a duplicate version of himself and his ship to multiple galaxies in the universe – the drive scattered across space. He must reassemble the lost pieces before the drive re-activates to send him home.

That’s the story hook that holds it together, the Alice in Wonderland aspect is all the crazy characters he meets along the way.

I’ve recently finished writing and drawing the 160+ page comic book, it was a massive undertaking for me. I’ve learned a lot from it and I’m really very proud of what I managed to achieve.

I’m not sure if I’m the best person to ask about the state of the comic book industry in the UK. Since I’m in animation and comics is a side gig for me, I’ve never really navigated the comic industry. The stuff I follow is mostly independent artists generating a following on the web and publishing their own stuff.

I feel like the publishing industry is looking at the indie webcomic stuff too though, I often see the most successful indie artists will sign a deal with a big publisher.

I’m interested in guys like Luke Pearson (Hilda) and Hamish Steele (Deadendia) who have had animated series commissioned based on their comics. I could definitely see that being a goal for me.

I think there’s definitely beginning to be a trend towards more diverse stories, people writing from a marginalized viewpoint, which is great as they have something new to contribute. It’s good to get new voices in storytelling. I’m not sure where that leaves me as a straight, white male, but in a sci-fi setting, my latest book is pretty diverse. I have a bipedal spider character who is best friends with a bipedal fly character. The most unlikely of partnerships, but they embrace their differences. I also have a giant worm creature who has hermaphroditic sexual organs, although that hasn’t come up in the story so far. -That is a deep question! Do comic books affect the realities of their readers? I think comic books are an escape from reality for the reader, but beyond that probably not. Something like The Incal might change someone’s reality after reading it. But my comics, not so much! Ha-ha

-My greatest achievement is usually the last thing I worked on so Jack Astro would definitely qualify. Although I think it needs to be printed in a book before I consider it finished and achieved.

-For newcomers to comics and animation, I would say an awareness of how much there is to learn is always good. I’ve been studying for 15 years and still find so much stuff that influences and informs my art.

Also, I would say that the goal in a lot of art is to work towards simplicity, not complexity. I think that idea gets lost a lot.

And finally, do small projects and finish them. Save the ambitious projects for later down the line.

-Next up is a crowd-funding campaign to print a Jack Astro book. And after that I have been considering a few projects. Mid-way through making Jack Astro I had a baby, and I’m thinking about doing some sort of comedy survival guide for new parents. There’s plenty of material there.