I was born in Arezzo, a small town in Tuscany. I’ve been drawing since I was two years old: my mother Silvia, a teacher, put markers in my hands and I scribbled on giant sheets. Even my dad Alessandro has always supported me, in his own way, and he never stopped believing in me. Now my dad is gone, I live in another city (La Spezia, in Liguria), and my mom continues to be a big fan of mine. I’ve always loved comics, even before I started reading them. In first grade I usually wrote in homework “when I’ll grow up, I’ll be a cartoonist”, and I never wanted to do anything else. When I was seven I saw for the first time a “Superman” comic in a movie, “Toy”, with Richard Pryor: it was love at first sight. Back then I was already reading books for adults, because it was the only way to get me to read something, since storytelling for children bored me. In particular, I was reading Ian Fleming, who left me in the passion for detective stories, intrigue, lacerating realism, desperation, suffering, redemption and the heart-breaking endings. 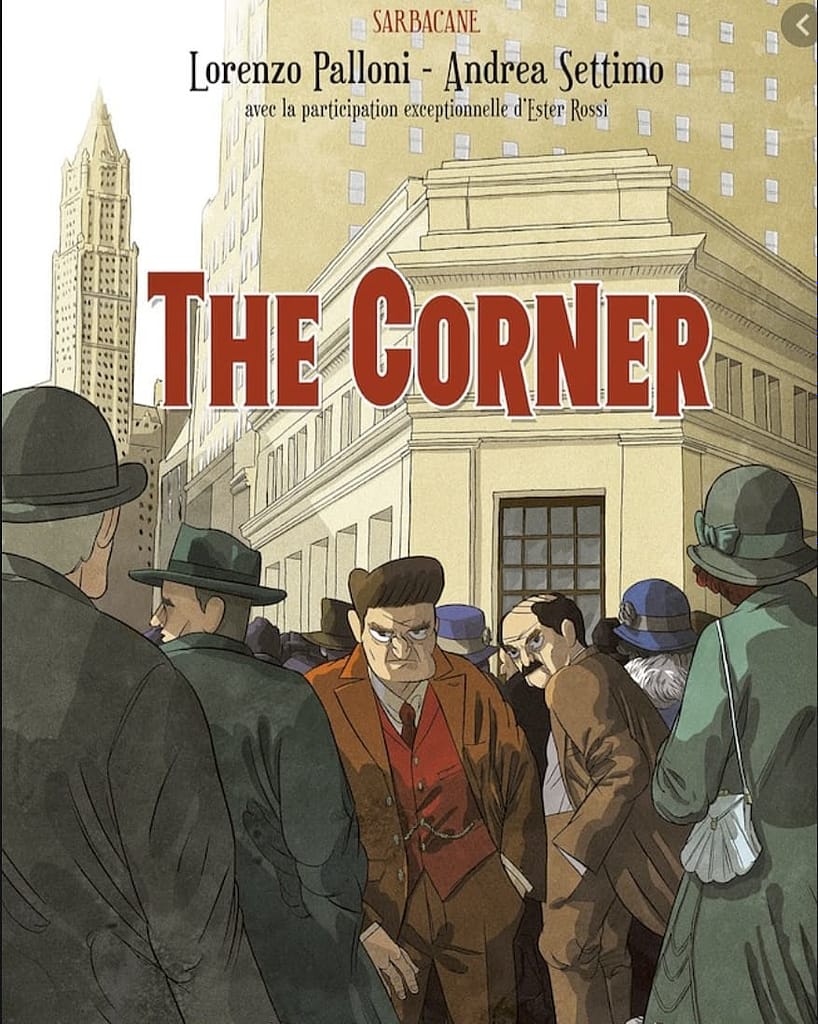 I grew up watching Tim Burton’s “Batman” over and over, but also James Bond films, “Die Hard”, “Beverly Hills Cop” and in general American films that gave me a strong taste for theatrical and violent “mise en scene”. Then I discovered comic books, the unusually dark and 80s “Spiderman” by Dematteis and Bugley, and as I grew up I began to read Alan Moore, David Mazzuchelli, Mike Mignola, Warren Ellis. And most of all: Darwyn Cooke, Frank Miller and Adam Kubert. I reached the capabilities to work on my own stories thanks to everything these paper masters taught me. As my favorite comic book character, I put Daredevil first: a blind Catholic lawyer who acts as a night vigilante disguising himself as a devil. What’s better than this?

I studied at the International School of Comics in Florence between 2006 and 2009. I was lucky enough to have Paul Karasik as a teacher, who broke my head and slipped into it deep concepts on the comics medium that I could never reach alone. Another teacher of mine, Matteo Casali, taught me the secrets of the scriptwriting. Luckily some of my teachers wanted me in a new cartoonists collective: Mammaiuto. We have been active since 2011 and we make free comics online, which we then self-publish, and whose comics we sell around the world. A proven technique that allows us full control and solid gains over the books we make. With Mammaiuto, the last piece went to the right place, and so I felt like a complete author. Coincidentally, shortly after I started working for the prestigious French market. I haven’t stopped since then, don’t think I ever will. 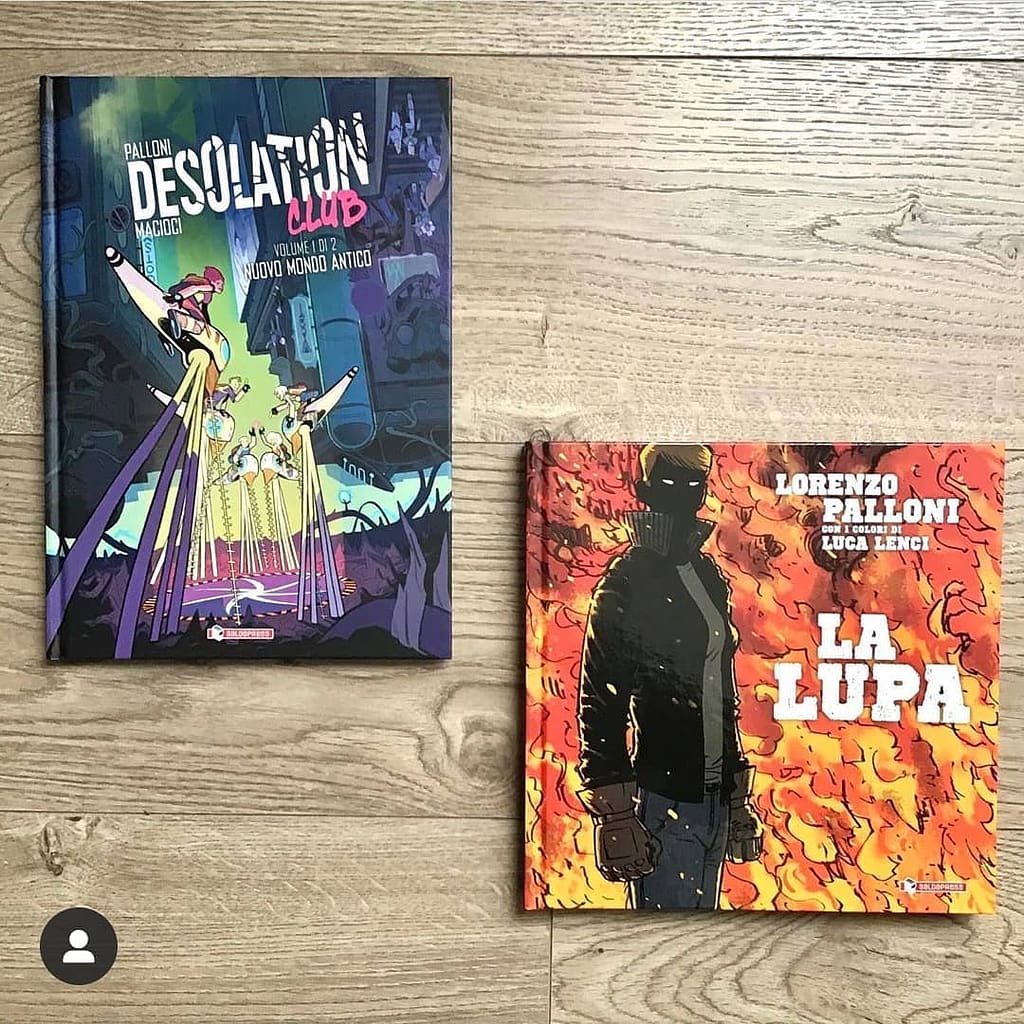 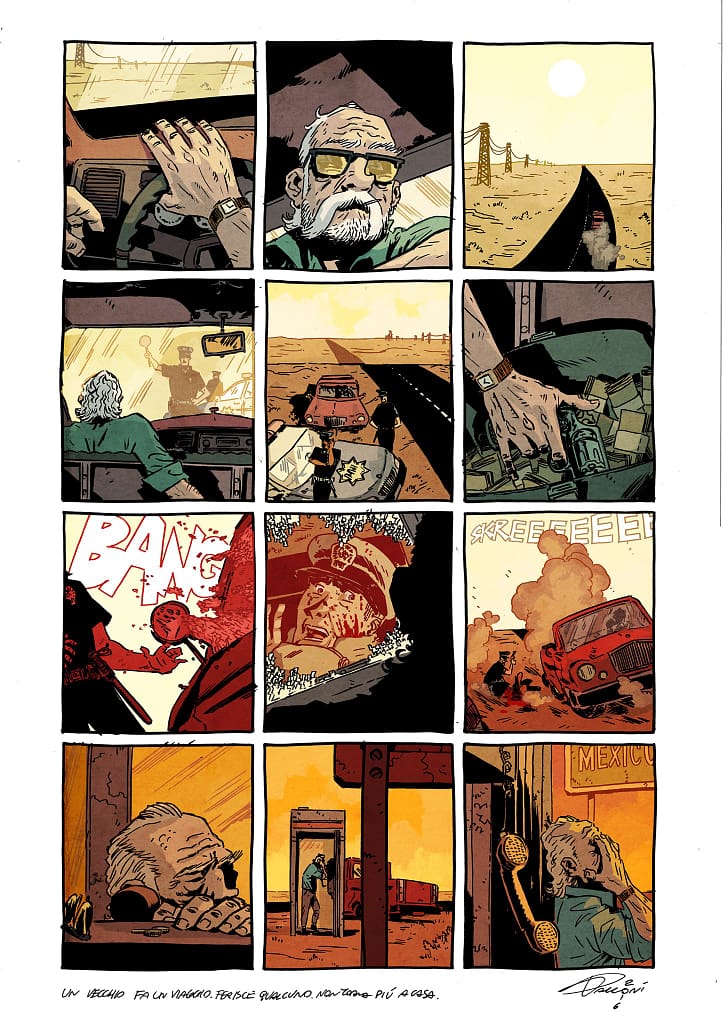 I have been a professional since 2012, but I’ve always been a cartoonist: I wrote my first comic story – on a personal level – at ten, eleven years old, and it was a fan-made story in the Marvel universe, focusing on the “X-Men” . On a professional level, I began to work when I was over twenty: I started publishing for the French market with a hard-boiled story set in the 1920s in America. It’s called THE CORNER (published in 2015 by Sarbacane Editions, and then in 2016 in Italy by Rizzoli Lizard), art by Andrea Settimo. But there were a lot of short and long self-made stories in between. The first for affection is definitely MOONED (which can still be read for free in Italian – and some parts in English – on www.mammaiuto.it). I prefer the macro-genre noir, both in writing and in reading, and in all mediums, because it can sincerely investigate dark aspects of human nature in relation to the society that we tend to suppress, but which should be, if not accepted, at least understood. It is the power of fiction: to go where reality cannot. I have published many books, and I always say that the best is the next, but in this case I think that one of my enjoyable productions (besides the aforementioned MOONED) is LA LUPA, released last year by Saldapress, is still in the bookstore and can be ordered in Italian on www.saldapress.it. It made me won two awards for Best Scriptwriter, but above all it has allowed me to expand my knowledge of the medium. It is the story of Ginger, a middle-aged woman who lives by collecting credits with all the violence she is capable of, and accepting herself and her place in the world. Nineteen chapters, nineteen cases of non-payment, and a point of arrival. The story can also be read on www.mammaiuto.it with the title of ESATTO, as it was called in the first self-production. It’s all free-readable online. I’m very proud of it.

There are two strands in Italy: bookstore and newsstand. The newsstand is for mainstream, pop comics; the bookstore is for graphic novels and collections. Comic books by Sergio Bonelli Editore, Marvel and DC comics are popular on newsstands; in bookstores Zerocalcare, Leo Ortolani, Fumettibrutti are selling a lot. The comics shop, on the other hand, is a singular environment, in which graphic novels are less, and where manga are the most popular. Italy is the fourth country for sales of graphic novels in the world, but we are also a country of ignorant people, where 70% of the population is functional illiterate. This can give an idea of ​​the low numbers that keep our market stable. Now, in the middle of the Covid era, I don’t know what will happen. I only know that many publishers will shut down production, because the market is held up by fairs (like “Lucca Comics & Games”), which now cannot be set up except without a market, and which invalidates their usefulness. Yes, there are manga that sell thousands of copies and keep publishing houses alive; American comics are popular with those whose art is by an Italian artist (an example is “Something is killing the children”, drawn by Werter Dell’Edera, published in America by Boom! Studios). Anyway, the sales phenomena are local phenomena: Zerocalcare, Tiziano Sclavi, Fumettibrutti, Sio, Milo Manara. 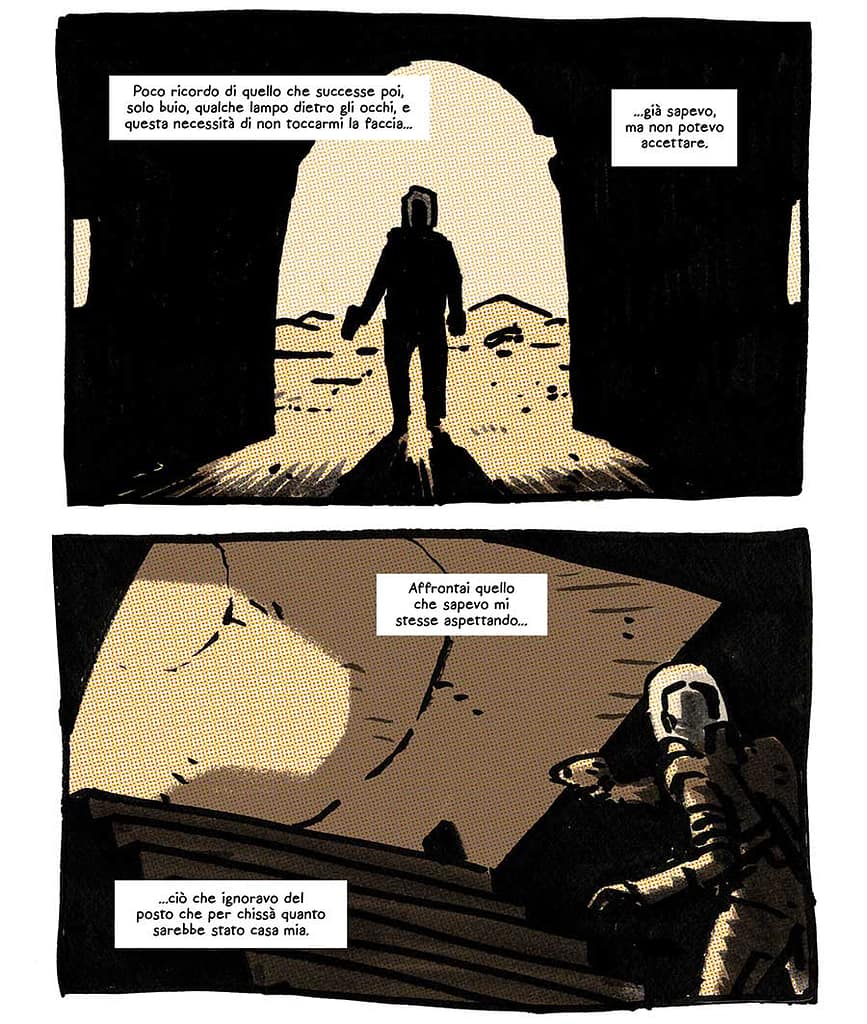 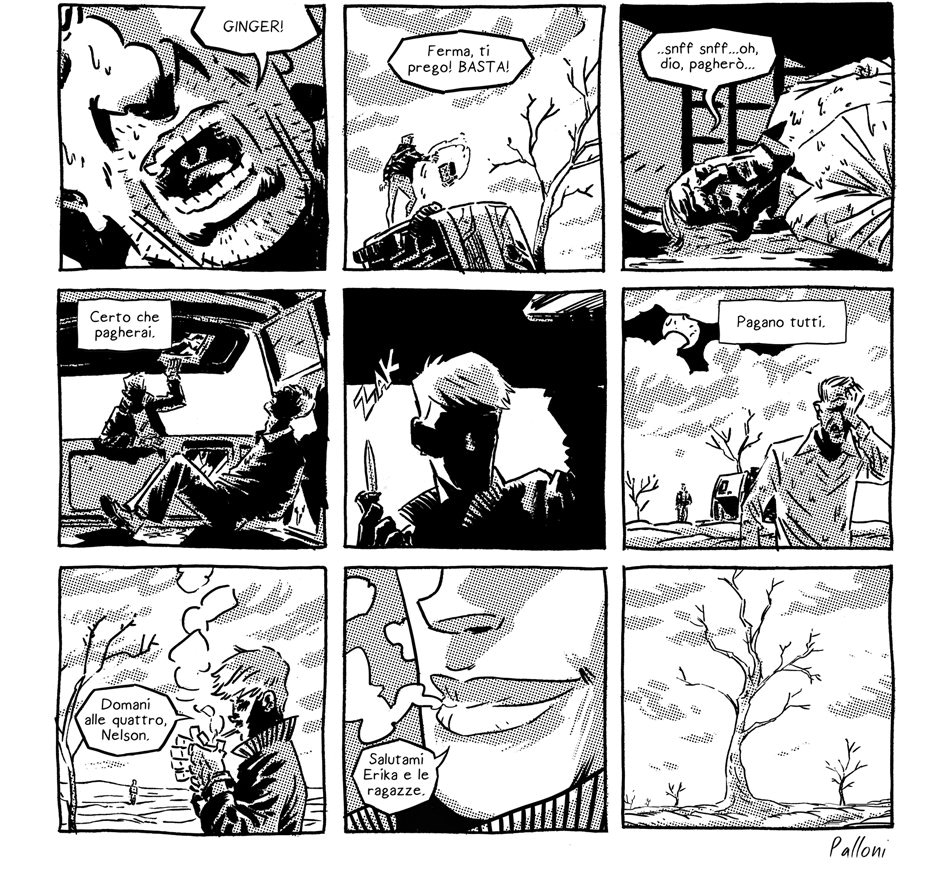 Absolutely yes comics affect society. Just think about the effect caused (and it is unknown to what extent it is intertwined with the market) by the “Black Panther” film. A comic like this caused a sensation, as the violent and contradictory “Batman” or “Sandman” did before. There is always a comicbook that breaks the rules, there is always a piece of medium (which is still thought to be for kids, generally) whose ideas drain into society and culture. In recent years, the most important and widespread comics are instant webcomics for all to see: memes. Controversial, hasty, profound: whoever has more, put them on a social network, and they work, they reach the reader directly and make them laugh, indignant, tell stories. And they are pure sequential art, which directly touches and changes society, before the other way around.

It always happened here in Italy: in the 1970s and 1990s, comics arrived in parliament, causing debate for their “violent and subversive” content. It was the era of the “K factor”. Black comics, for adults, with violent and erotic content were published on newsstands. Parliamentary motions, threats, but nothing has changed, except that underground comics have become popular, especially in recent years. I live in a country where the idea of comics is still embodied by “Mickey Mouse”, “Tex” and “Diabolik”. Two authors in particular have and will have a social impact: Zerocalcare, a militant boy on the left, who promulgates humanitarian ideas with an enviable delicacy with his stories; Sio, cartoonist who works mainly (but not only) with children and teenagers, also thanks to the medium of YouTube. I don’t know what effect Sio will have on the kids he is starting today to read the medium, I hope it is important, so that in a few years they will all be used to reading comics and have strong and right ideas about humanity and brotherhood.

I should say that my greatest achievement so far: the award for Best Scriptwriter at Lucca Comics & Games 2019 for the books LA LUPA and INSTANTLY ELSEWHERE, art by Martoz. In fact, my greatest achievement is something I reach everyday: earning a living from my job and my passion. It is something I have come to with constancy and self-denial, making great sacrifices, and I am proud of it. Living by your own stories is an unattainable privilege, no matter how much effort it takes.

And so for newcomers I say: what to do: work day and night, incessantly, on all the stories that come to mind. Build them, destroy them, rewrite them, until you as author are centered on what you tell. Understanding what you tell is understanding yourself, and once in focus, the solidity of writing will follow. What to do, again: rely on who you know and who you respect. Let those who you know will destroy you, but whose thoughts you trust, read your stuff. No one is ever objective about their stories, it is intrinsic to human nature, you need an external look – an “editing” – to make what you tell usable to the reader, as universally as possible. What NOT to do: think you are good. No one is, ever, we are just better suited at that precise moment to tell that precise story. Never be touchy, never be jealous of what you tell: giving trust and stories will pay you back in respect and – even – money, later. Never be satisfied. Never stop. Never let anyone stop you.

Next: I am writing an entire DYLAN DOG Color Fest issue – three stories, one of which I will also draw – for Sergio Bonelli Editore and a mystery novel set in the world of pirates called L’IGNOBILE SHERMANN, to be released in France by Ankama Editions, at the end of 2021. In addition, I am drawing a book that I have been writing for eleven years, which is called at the moment 6592, a choral noir set during the Los Angeles riots of 1965 and 1992, which will also be released in France in 2021 for Sarbacane Editions. All very difficult things, all things I do at the same time as teaching in the Schools of Comics in Florence and Reggio Emilia. If I get to 2022 alive, it’s a miracle. I would like to draw INSOLENCE, a story that I have been writing since 2007, because it’s the sum of everything I’ve ever love. One day I’ll make it, but not today, and not tomorrow, I guess. 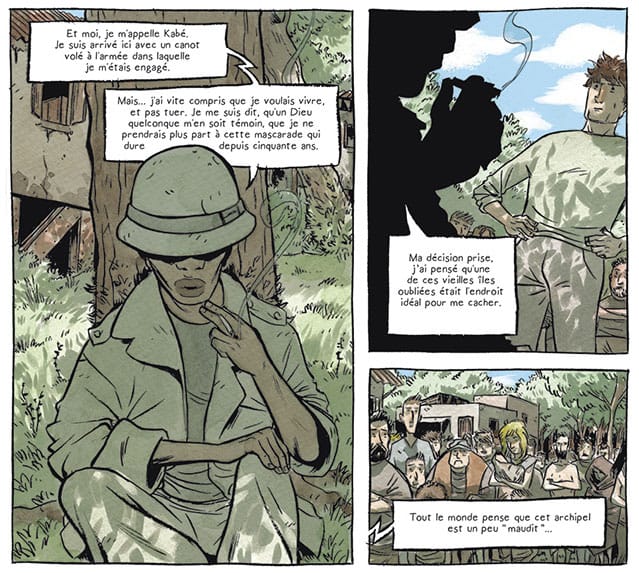