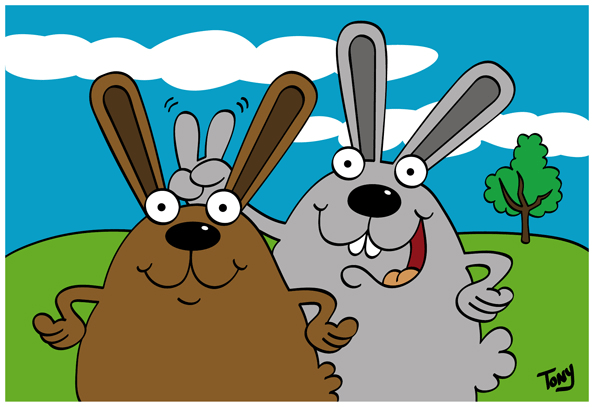 I was born and live in Bristol in the U.K. Like most children I loved to draw, but it was more than that, it was an incredible source of enjoyment and fulfilment for me, that I just felt compelled to do. Even at an early age I had a drive to get better at drawing and apparently, according to my mother, I would often throw drawings of mine into the waste paper basket, if I felt they were found wanting in anyway. One of my first childhood memories of creating a cartoon was while I was on holiday at a farm owned by family friends. The drawing was of a farmer getting into a fit of anger about something or other. I got real enjoyment out of drawing it and equally surprised by the reaction it generated when people saw it. I was hooked!

I really loved comic art, from the humorous comics like The Beano and Whizzer & Chips, to the Marvel and DC comics which were a source of inspiration for me at the time and still are. My main work at the moment is producing various single panel gags, for which I sell licences, so people can use them for their publications, on websites, blogs, newsletters, or as visual aids for public speaking. I also produce my own greeting cards and sell them locally. I mainly work digitally, drawing on paper first and then producing the finished artwork in Adobe Illustrator. Other than this I have been involved in painting murals and creating cartoons for advertising.

You will find that some of the things I enjoy influence some of the cartoons I create. I have cartoons about faith, history, animals and vampires, but I do like to tackle all sorts of subjects to see if I can put a comic twist to them. Life can be very odd, strange and hilarious, so inspiration for creating humour is just a matter of looking for it. 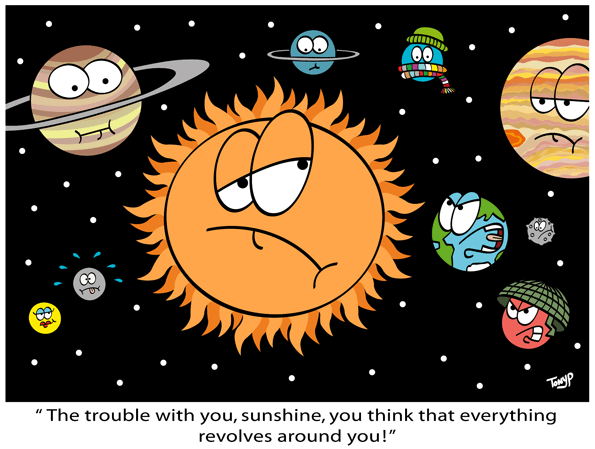 With TV and film, I have always tended to enjoy comedy, science fiction and fantasy. Films like, the Ealing comedies, Jaws, Planet of the Apes, Star Wars, the Carry On films and later the Hammer Horror films made a particular impact on me. As far as television is concerned, at an early age I loved Sesame Street, and the Banana Splits, then later, shows like Planet of the Apes, Addams Family, The Munsters, Quick on the Draw, Doctor Who, Dad’s Army, Benny Hill, Monty Python and the Young Ones. There was so many great comedy programmes around in the seventies, I could list so many shows I used to enjoy, which I feel informed my love for comedy and cartooning.

When I was young my favourite cartoon would have been Charlie Brown, by Charles Schultz, and much later Gary Larson’s, The Far Side. Charles Schultz drew with such a simple beautiful line with sweet, but sometimes philosophical humour. Larson’s unsettling, funny and weird characters and gags are just wonderful. I think both of these artists inspire my cartooning today, so I tend to love to put daft, weird and bizarre humour in my own work. Of course, cartooning can be used for many purposes, including greeting cards, book illustrations, gags and comic strips for print and websites, etc. I think the appetite for cartoons in their various forms is as strong as ever and that can be seen just by looking at the internet. However, the ability to monetise your work is not so easy. There are less opportunities to get your cartoons printed in newspapers and magazines, plus the market for these are generally dominated by just a few cartoonists and some publications are reluctant to pay for cartoons, which is a unwelcome development. But this is the way of the world. Things change and so we need to learn to adapt.

Even though it might be for just a moment, it is just great that cartoons and the humour around them can brighten up people's mood. I think light relief in a world of doom and gloom is always welcome. When I attend art trails I get a real kick from seeing people laugh at my gags. Of course, stuck in my studio I do not get much opportunity to see any reactions, but it is always a bonus when I do. 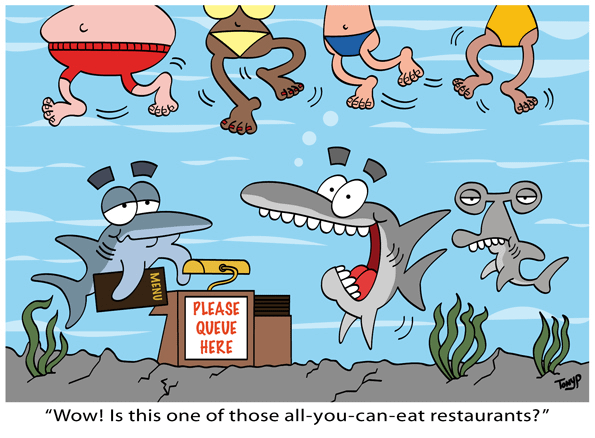 After doing A level Art, I went on to do an Art foundation course and afterwards a BTEC Higher National Diploma in Graphic Design, becoming a graphic designer working for in-house studios. Understandably, all of the courses I did had elements of illustration within them. Gaining those basic drawing, design and composition skills helped very much, but cartooning was somewhat frowned upon in those days. In fact, when I expressed a desire to become a cartoonist to a tutor, he told me to not be so bloody stupid! So as a result most of the development of my cartoon style and gag writing was done in my own time and learning on the job as a freelancer. As a graphic designer I would do a cartoon for a job when it was appropriate, but when I became a freelance cartoonist for a local advertising company, I needed to produce cartoon illustrations for various adverts and to tighter deadlines than what I had experienced as a designer. It was a very steep learning curve. I am not sure what my greatest artistic achievement would be. Would it be my first commission, creating my style, the most prestigious commission? It sounds very cheesy, but for me I always feel I have achieved when my work brings a moment of joy to people.

I still have a lot to learn myself, but for those who want to be gag cartoonists I would say the gag is more important than the drawing. A hilarious gag with stick figure, is better than an awful gag that is well drawn. However, saying that, the greatest cartoonists usually have got both going for them, so work on your gag writing along with your drawing skills. I also think that seeking advice is also a good move. We can tend to be a bit shy and embarrassed to reach out and I think if I had done so in those early years, I would be further along my career than I am now. I joined the Cartoonist’s Club of Great Britain at the end of last year to rectify that. I have often hit road blocks, so it is a good thing to see if there are others out there who are able to help you to go forward with your work.

For the rest of the year I will continue to produce single panel gag cartoons. I have been playing about with an idea for a comic strip for a number of years, but I intend to concentrate on it next year. My long term project is to develop a series of paintings. I have not painted for a while, so at the moment I am developing my skills in that area.