I find that the most difficult thing to explain to people who aren’t from my region is where I’m from. I am a native of Novi Sad, a beautiful city on the shore of Danube. I was born in Yugoslavia, which used to be one big socialist federation, providing a political alternative to other blocs between it was placed. It was much closer and more open to the western culture than the eastern bloc – which is important to know with regards to my love of comics. Unfortunately, this moderate and pretty modern way of governing, which was certainly far from perfect, didn’t stop us from spending the years of transition embroiled in a bloody civil war and the dissolution of the federation itself. That is how I, living in the same city, managed to live in three different countries. Due to nostalgia for the multi-ethnic society I grew up in, I still consider myself a citizen of Yugoslavia, even though it’s long gone, and my current homeland is the Republic of Serbia – a small country in the Balkans.

Like most other authors, my love for comics and illustration stems from my earliest years. I started with Disney characters and the Bonelli-published comics. Thanks to them, I learned to read from a very early age. Then came the comics from the American and Franco-Belgian scene. The final, and the most impactful influence on me were the authors of the Franco-Belgian new wave, Moebius/Giraud, Hermann, Bilal and their “successors” among the local – Yugoslavian – comic book authors. All those wanderings are clearly noticeable in my works, my authorial attempts to find myself. Here we don’t really have conventional schools for comic book artists. There are some beginner’s courses led by comic book authors, but we’re still forced to self-educate, to exchange our own experiences with our colleagues – that is how we perfect our craft. Most of us have degrees from classical art schools for design. I finished High school for Design, which in its program had a lot of classes that could be of use to comic book authors. Most of my classmates from our generation make comics or illustrations. I was fortunate to have a brilliant generation of pedagogues who were extremely successful and esteemed in their respective fields.

I believe it’s the same around the world, comics are a specific area, and far too liberal so that you can easily make a program that would educate comic book creators. Most important are our experiences as readers, while the art schools merely provide us with the craft so that we can technically put to paper what we’ve learned from reading comics.

My first professional dabbling within the comics field started with my anti-war and anti-political comics… That is where I made the most impact during the wartime nineties. In those days certain caricatures and comics could cause quite a stir. After that came my attempts to create comics book characters to whom I could really dedicate myself: Roby Zgazgi, Black and Angela, short biker gag-comics for one German and one Croatian magazine, which all led me to Just a comic… That series is currently running as the featured comic in my self-published magazine by the same name, along with reprints of some of my older works, as well as some comics that are just me trying out certain new concepts. I reckon that those struggles and experiments will ultimately lead me to creating a comic that’s a perfect fit for me. From all that came the first album in the Planet Comics series, which will in the years to come serve to unify all the comics I’ve ever created. And it seems that The Mummy, one of the main characters from that series, might serve as the connective tissue for all those other works. I think comics affect readers, indeed. That can mostly be seen during growing up, and the formation of one’s personality. I don’t believe that comics can shift someone’s worldview, other media seem to be much more aggressive and influential in that regard. But I do think that they most often positively influence the lives of their readers, and make them morally and creatively better people.

I don’t really want to pick one thing as a greatest achievement amongst my works. I think it is better that determination be made by someone else, in the future. Especially since I’m working on uniting all my creative works via Just a Comic and Planet Comics, and create several comics that should define me much better than my works so far. The new works always seem to me better than the old ones, and as long as that remains to be the case, I will have the will and desire to make them. Currently, I’m preparing two serious projects, one a self-made work about a dystopian future, and the other is a collaboration with colleagues I worked with before, a comic book about getting old in the countryside, and taking care of a migrant orphan.

For newcomers: my easiest advice I can give is: don’t follow my example… J Still, I have a good alibi for all my problems in that goddamned civil war that dissolved my country, then came the turbulent years full of extremely bad politicians and their hate-fuelled rhetoric. For a long time you couldn’t really earn a living making comics. At a time when I was starting my family, there wasn’t really any work for comic book artists, and we were also under international sanctions, so the only way to provide for my family was to switch to some other line of work: design, pre-press work, typesetting for book publishers… Today I bring those experiences to comics, so I make my living lettering comics and doing graphical layouts for comic book publishers. For fifteen years I was a staff member of the most important comic book magazine in the Balkans (Stripoteka), but then the publisher got a new owner, and it got cancelled, so now I work as a freelancer. I work solely on comics, but unfortunately not enough of that work is centered on my author projects. That’s why I have all those publications (Just a comic…, Planet Comics) and e-sales, sine I’m trying to find a better path for authorial work.

So, I would advise you to either be more selfish/egocentric, or be prepared for a lifelong struggle. If the surroundings you live in aren’t optimal, change them early on, since that might hinder your growth. The Internet today provides a decent way out, but doesn’t always help. You have to fight your own way to the top. Especially if you want to create comics that are a bit different, non-mainstream and more personal. And never let yourself lose faith; every goal is attainable!

As for my new projects: I am currently focused on the world-building on my Planet Comics, so everything I might work on will be somehow connected to that and my Just a Comic… magazine. I have a breakout, fan favourite character from that series, The Mummy, so I’m going to try to use him to tell as many of my stories as possible. 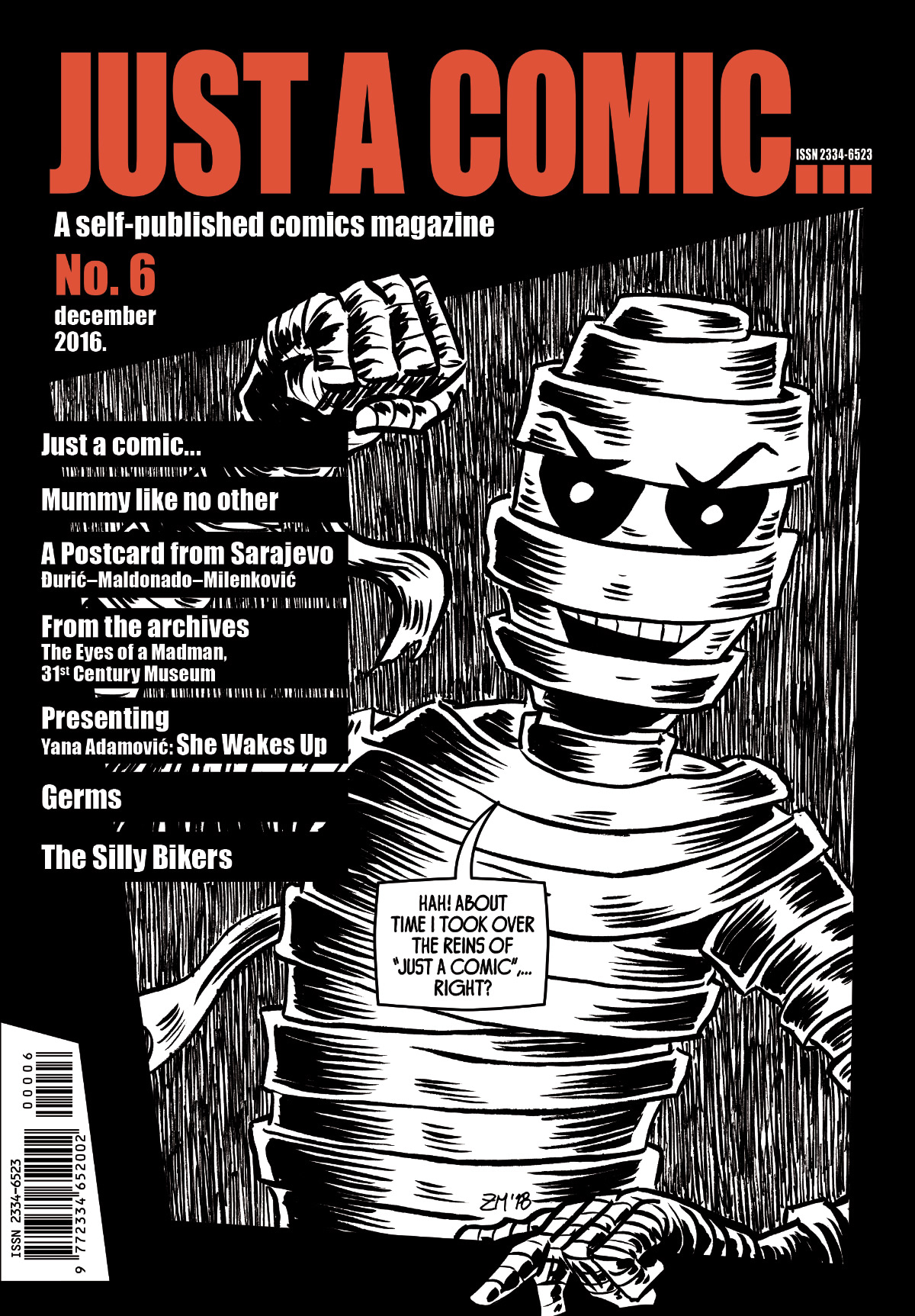 When I was a kid, the cinema was like a second home to me, I’d go there to watch everything a teenage boy might be interested in, so there were all sorts of things there that influenced me. Of course, in time, my love for Sci-Fi crystallized itself, and that is where I can pinpoint the biggest number of influences. As a kid I was a fan of Star Wars and the related iconography, while today I find Star trek much dearer to my heart, since it provides a much more acceptable future and more interesting stories. I love crime fiction, and there I mostly enjoyed the pulp novels. Yeah, I really should be making space whodunits. Books provided a much bigger influence on me than movies and TV shows. When I read something, it tends to leave a stronger impression on me. I love the theatre, but only the plays, frankly, I can’t stand ballet and opera: I appreciate and respect them, but they don’t appeal to me – unlike their music.

When it comes to comics… well, it would be unfair to list all the influences and heroes. It’s much easier to list the authors themselves. Hermann and Giraud/Moebius are the authors I can without hesitation say I respect most. There are also Bilal, Arno, Gimenez, Risso, Romita both the father and the son), Milazzo, Pellejero, Juillard, Giardino, Guardino, Pratt.

When it comes to characters… well, I’m not really attached to any of them. They were important to me when I was growing up, but today I value comic book characters mostly based on the fact which authors worked on them. A good author, or a team of authors, can take even the worst characters and create a masterpiece. I am more in tune with graphic novels, comics made by people such as Craig Thompson, Rabaté, Chabouté… While I like the heroes themselves only when they take a step in that direction, when the hero is merely the vessel used to tell a story. Something like the knight Aymar from Hermann’s Tours de Bois-Maury. 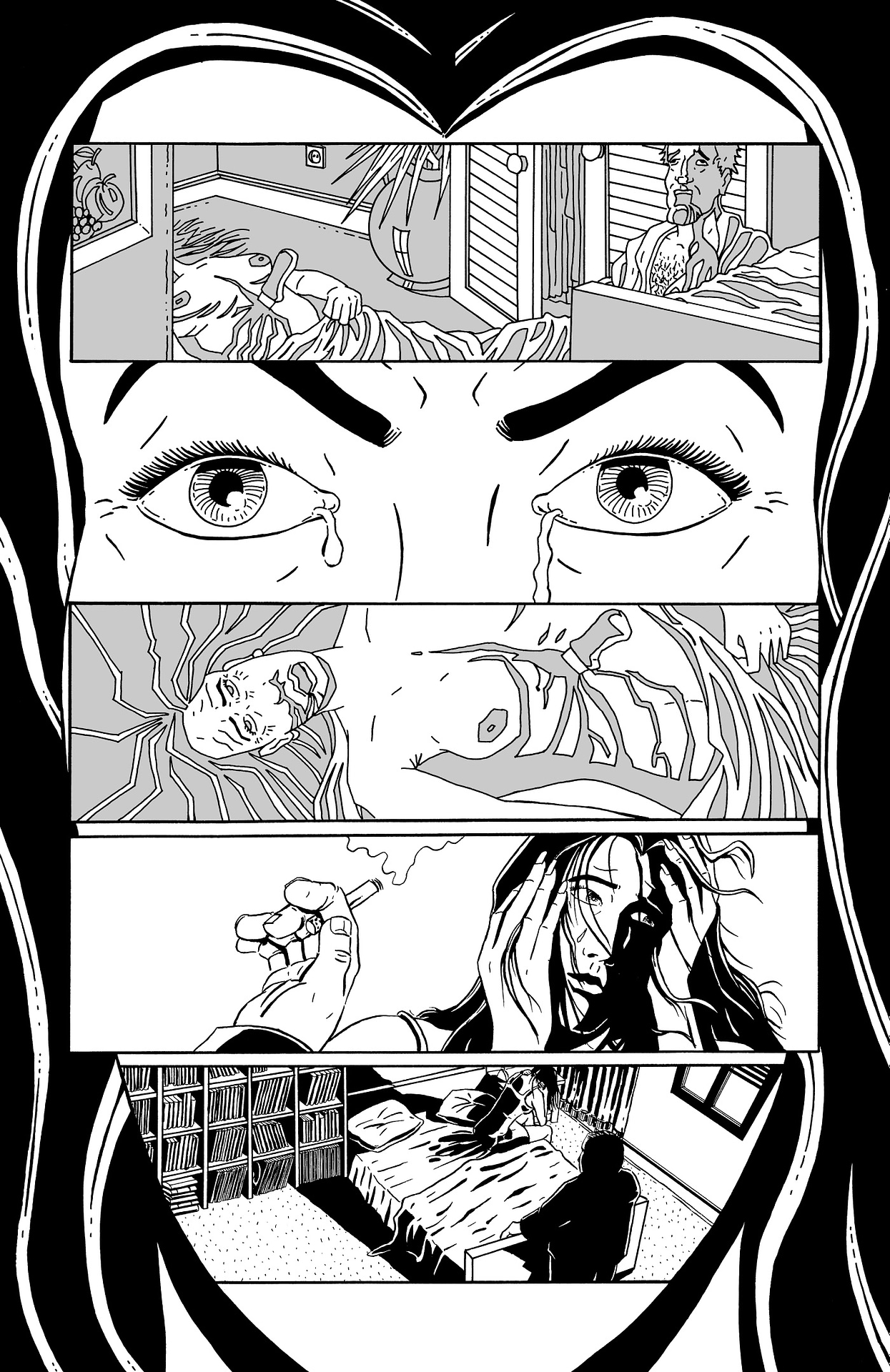 Like I previously stated, the former Yugoslavian Federation was very much open to Western culture, and we we’re flooded with numerous comics publications. One might even say that our Non-Aligned Movement politics provided a perfect platform for an extremely interesting comics scene. Our comic book magazines simultaneously published American superheroes, right alongside with the heroes from the Franco-Belgian, Italian, Spanish, British and Argentinian schools (or rather, the entire South-American scene), and even some Chinese masters. Due to such a wide range of comics, both readers and comic book authors alike had an incredible mixture of influences. Three comic book “schools” had an equally powerful influence: the American, Franco-Belgian and the Italian schools. When it comes to American comics, those weren’t just superhero comics, since American newspaper comics were an extremely strong influence as well. During my formative years, the most respected school of comics was the Franco-Belgian one, and we had the opportunity to read some of their greatest masters. However, Italian comics produced by Bonelli had the greatest success in the long run. They managed to reach the widest audiences and have enormous print runs.

We’re in a similar situation today, only we don’t have the comics magazines on newsstands anymore, they are all now publications for bookstores and specialized comic-book stores. Bonelli is published and sold in luxury editions. Standouts from the American scene are mainly superhero comics, partially because we all grew up on them, and partially because the new generation of movies raised some new generations of fans of that genre. The masters of the Franco-Belgian comics fall somewhere between those two, both influential and beloved, but not that profitable for the publishers themselves, so the carefully choose which titles to publish. Which is ultimately good for the buyer, since there are practically no bad comics there.